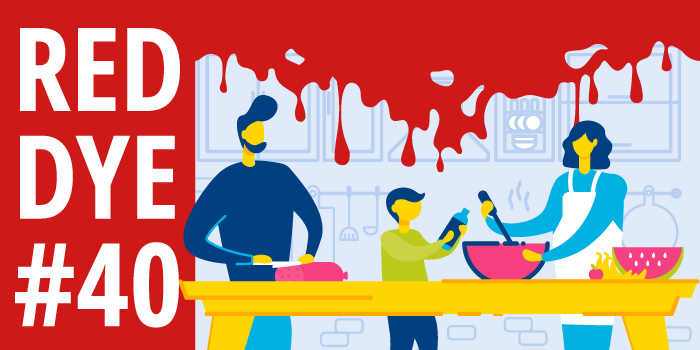 See if you can figure out what the following list of foods has in common:

Besides being an unhealthy part of the Standard American Diet, if you guessed that they all contain Red Dye #40, you’d be correct.

Horrifyingly, the food industry dumps 15 million pounds of artificial dyes into our food every year – over 40% of which is Red Dye #40, a petroleum-based substance. Red Dye #40 is the number-one food dye used in the United States, found in most unnaturally red foods.

Even though there are safe and natural alternatives available, artificial food dyes are a cheap way for manufacturers to make food even brighter and more appealing when you see it on a shelf in the grocery store.

Although Red Dye #40 has been approved by the FDA for use in food products and must be listed as an ingredient on labels, it has been banned at one time or another throughout Australia and most of Europe due to health concerns.

Not all of the foods with Red Dye #40 are red. You will also find it in brown, blue, orange, and even white food products, too. For example, without Red Dye #40, the chocolate instant pudding would actually look green (because there’s VERY little real chocolate in it).

Food items aren’t the only place you’ll find this artificial coloring. Many personal care products, such as toothpaste and mouthwash, can be artificially dyed. Even more disconcerting, some prescription medications may be tinted with the stuff.

THE CONNECTION BETWEEN RED DYE #40 AND ADD/ADHD

Multiple studies published in journals such as Pediatrics, The Lancet, and Journal of Pediatrics demonstrate that some children with ADD/ADHD are adversely affected by artificial food dyes. Other recent research indicates that artificial coloring and flavors, as well as the preservative sodium benzoate, can make some non-ADD/ADHD kids hyperactive.

Some children who have been diagnosed with ADD/ADHD and are taking medications for the condition make such an improvement after eliminating Red Dye #40 from their diet that they are able to stop taking their prescription drugs.

Many parents who notice increased hyperactivity in their children after a sweet snack mistakenly blame a “sugar rush” for the bad behavior. But often, it’s the artificial food coloring that’s the real culprit.

Additionally, both adults and children have reported upset stomach, migraines, jitteriness, nervousness, and inability to concentrate after a high intake of Red Dye #40. The Center for Science in the Public Interest (CSPI) recently released a report that says artificial food dyes pose a “rainbow of risks,” including everything from allergies to cancer.

Our brain imaging work also demonstrates that Red Dye #40 can dramatically affect brain function. Consider the case of Robert, a 15-year-old who was recently imaged at Amen Clinics. His parents noticed that whenever Robert ate or drank something bright red, his behavior became aggressive and hostile. He would easily cry and storm off in a huff or throw things. They brought him to Amen Clinics to confirm their suspicions that he was reacting to these food additives.

Once they removed Red Dye #40 from his diet, his behavior improved dramatically. Robert’s mother strongly believes that their experience is not a unique one and that Red Dye #40 should be completely banned from our food supply.

Knowing that you are what you eat, no discussion about changing your diet for health can miss the importance of eliminating this substance!

To rid this artificial coloring from your family’s diet, you need to learn to scour nutrition labels. Red Dye #40 goes by many names. Look for any of these ingredients on labels:

Be aware that even though food manufacturers are required to list the dye on nutrition labels, they don’t have to specify how much is included. Your best strategy is to steer clear. At Amen Clinics, we want to help you learn more about your brain and how you can make it better, not only for yourself but for the generations that follow. Call us today at 888-288-9834 or visit our website to schedule an appointment.