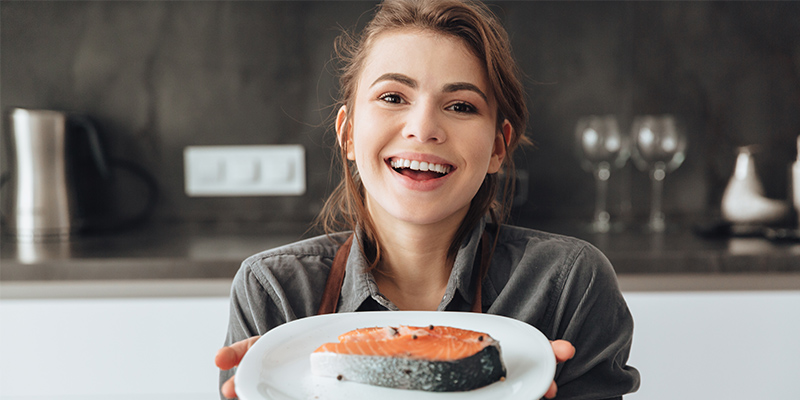 The Truth About Pregnancy and Consuming Fish

Eating healthy during pregnancy is one of the most important things to take into consideration for the health of your baby’s growth and development. After all, if you are eating brain-healthy foods, so is your baby. An ideal diet for a pregnant woman is one that incorporates a variety of vegetables, fruits, grains, and lean proteins like fish.
h
Fish is one of the healthiest forms of lean protein you can eat, but you need to make sure the fish you are eating is wild caught high-quality fish that is contaminant free.  Pregnant women need to be especially careful because eating fish that contain even low levels of mercury can increase the risk for attention-deficit/hyperactivity disorder (ADHD) in offspring.  This can be confusing for mothers to be because there are also several other types of fish during pregnancy may protect against the disorder.

Is There An ADHD Risk in Children From Their Mother’s Fish Consumption?

A cohort study of almost 400 children showed that the risk for inattention and impulsivity at the age of 8 years was significantly associated with maternal mercury levels and as the mercury levels increased, so did risk. The study was conducted between 1993 and 1998.  788 infants from Massachusetts were enrolled in the study which was designed to assess a possible link between exposure to polychlorinated biphenyls (PCBs) and neurodevelopment.

Soon after birth, hair samples were collected from the mothers and analyzed for mercury levels. The mothers also filled out a questionnaire regarding fish consumption during pregnancy.

At 8-year follow-up, 421 of these children were assessed for possible ADHD behaviors and the results showed that not only was mercury exposure associated with inattention and impulsivity/hyperactivity, but the risk for these behaviors increased with maternal hair mercury levels.  The threshold for first association with ADHD symptoms appeared to be at least 1 μg/g or more of mercury.  In addition, these associations were more notable in boys than girls.

This research does not mean that pregnant women should avoid eating all types of fish because the study also found offspring of mothers who consumed at least 2 servings of fish a week (which is currently more than the current recommended amounts from the FDA and EPA) had a decrease in ADHD-related behaviors — especially in impulsivity/hyperactivity. “These findings underscore the difficulties of balancing the benefits of fish intake with the detriments of low-level mercury exposure in developing dietary recommendations in pregnancy,” write the investigators.

Although the researchers did not assess which fish are worst and best to consume while pregnant, they noted in a release that previous studies have shown that shark, fresh tuna, and swordfish should be avoided by pregnant women, whereas fish such as haddock, salmon, and flounder are good because of their low levels of mercury and their nutritional value. “Women need to know that nutrients in fish are good for the brain of a developing fetus, but women also need to be aware that high mercury levels in some fish pose a risk,” said lead author Sharon Sagiv, Ph.D., MPH, from Boston University School of Public Health in Massachusetts.

A diet rich in omega-3’s can help boost mom and baby’s brain and neurological development. Incorporate a DHA supplement, flaxseed oil, walnuts, and fatty fish to avoid getting DHA from high mercury foods. Benefits include better memory, vision, and better language comprehension during their early childhood. Mom’s can reap all these benefits and reduce the risk of post-partum depression. Recognizing how important it is to make sure the fish you consume comes from high-quality wild caught sources is a must. The National Institutes of Health recommend that pregnant and nursing women get at least 300 milligrams of DHA in their daily diet.

Amen Clinics wants to help support brain health of all women including the health of our future generations. If you or someone you know is struggling with brain health contact us today at 888-288-9834 or schedule a visit today. For daily brain health updates, follow us on Facebook.