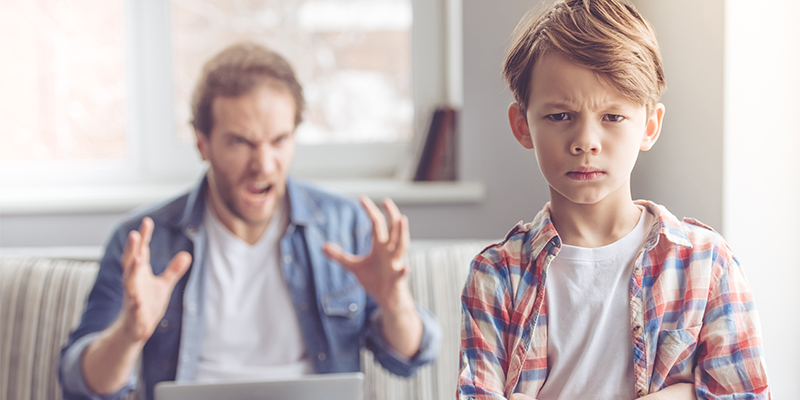 Before becoming parents, did you ever witness an exasperated and overwhelmed parent lose it in Aisle 7 and find yourself thinking smugly, “I’m never going to yell at my kids”?

Trying not to Lose Your Temper can be Difficult

When your child does not listen, behave, comply, or openly defies, it can understandably send even the most patient of parents over the proverbial edge. However, the reality is that yelling is not an effective behavior management strategy and usually backfires.

As a way to feel more alert ADD children often find themselves conflict seeking; it stimulates them on an unconscious level. Kids and teens with ADD can be masterful at making other people mad or angry at them.

But it is imperative that you not lose your temper with them because it often makes things worse.

If they get you to explode, their low energy frontal cortex turns on, they feel better, and they unconsciously come to crave it. You do not want to let your anger be their medication. They can get addicted to it!

That’s right, we’ve actually seen ADD kids get addicted to their parents’ anger. And if you end up giving them the adrenaline and dopamine rush that they are looking for by engaging in conflict and yelling at them, they will figure out how to make you do it again…and again…and again.

Sound familiar? Then read on for some suggestions on what to do instead of yelling.

It is important to note that once parents learn how to become less reactive, to not feed the need for adrenaline and dopamine with anger, the ADD child may initially get worse.

It appears the child with ADD goes through withdrawal when others become calm and regulated, at least initially. When they can no longer get the adrenaline anger rush, they go after it full force.

Unconsciously, they seem to say to themselves, “I have been able to get my adrenaline fix from you for a long time, I know I can make you yell at me.” They escalate the outrageous behavior.

But if you can remain nonreactive for a long enough period of time, the conflict driven behavior usually significantly diminishes. And be prepared that, like a drug addict (think adrenaline junky), they will periodically test the “nonreactive skill” of the people in their environment by seeking intense emotional reactions.

What to do Instead of Yelling

Remember that yelling shows your child that you, the almighty parent, has lost control. Your child will always do more of what you do, not what you say. Therefore, the more you can model calm behavior, the calmer your child will become.

Amen Clinics has helped tens of thousands of people with ADD/ADHD from all over the world. With targeted treatment, you can change your brain and change your life. If you feel that you or a loved one could benefit from an evaluation, contact Amen Clinics today at 888-288-9834 or visit us online.