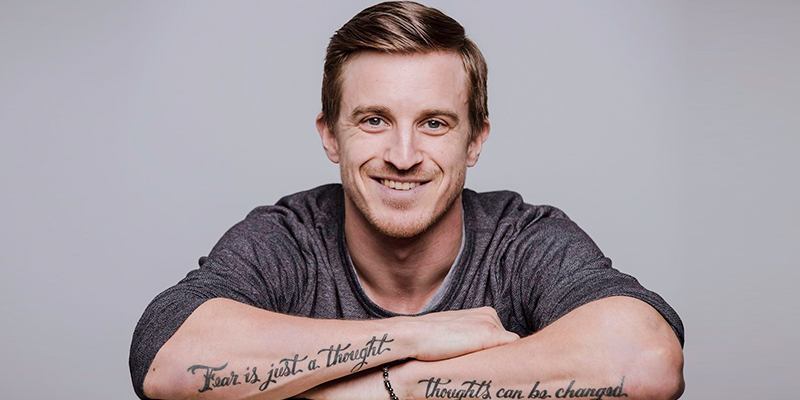 In 2009, everything was going right for 20-year-old BMX bike rider Josh Perry. He had just won his first pro contest and was the first to complete a 360-barspin-barspin-tailwhip—a mind-blowing maneuver that earned him first place in the best trick contest.

The Accident that Changed Everything

Like all BMX riders, Josh was used to falling and getting back up. He’d had his share of concussions, but after a particularly bad crash in 2010 when he smacked his head hard, he got hit with something completely unexpected. The hospital doctor performed a brain scan then gave him the good news first—there was no swelling or bleeding from the accident. Then came the bad news. Josh had a brain tumor that was taking up nearly the entire left side of his brain, and it might be cancer. His doctor told him he needed to have surgery immediately and warned him, “You may not wake up, and you’ll probably never ride your bike again.”

Josh could barely make sense of the words—cancer, never ride again, not wake up. He was only 21, a professional athlete, and living out his dream. This couldn’t be happening to him. Fear, anxiety, stress, and worry set in. Then he got caught up in a victim mentality, wondering, “Why is this happening to me? What did I do to deserve this?”

Things were looking grim for Josh, but he managed to make it through the surgery (the tumor was benign). Remarkably, just 5 weeks later, he was back on his bike. And two months after that, he was competing again. He had figured a way out of that victim mentality to get back to what he loved.

Today, after being diagnosed with 2 more brain tumors, he’s hit the brakes on his BMX career to become a brain and health advocate. And he’s loving every minute of it.

Josh recently joined Dr. Daniel Amen and Tana Amen for a 4-part series of The Brain Warrior’s Way Podcast to talk about his inspiring journey. You don’t have to have a brain tumor to benefit from the insights he’s learned along the way. They can help anyone who’s dealing with any kind of challenge—including the physical or mental consequences of a traumatic brain injury (TBI)—to rise above those difficulties and start living and loving your life again.

In this inspiring series, you’ll discover:

Listen to the 4-part series about brain trauma and recovery with Josh Perry, Dr. Daniel Amen, and Tana Amen on the Brain Warrior’s Way Podcast.

At Amen Clinics, we have helped thousands of adults and children with concussions or traumatic brain injuries (TBIs) to heal their brain. We use a combination of the least toxic, most effective therapies, which may include neurofeedback, hyperbaric oxygen therapy (HBOT), nutraceuticals, and medications, as well as simple lifestyle changes that can make a big difference.

To find out how we can help you overcome the challenges you’re facing, talk to a specialist today by calling 888-288-9834 or schedule a visit online.