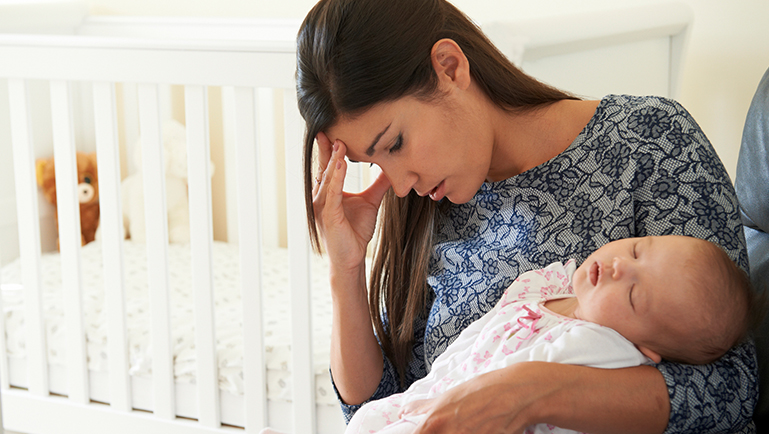 Many new moms experience the “baby blues” after giving birth, but it’s when feelings of sadness, hopelessness, or exhaustion get in the way of daily functioning and parenting that it may be postpartum depression. The condition, which is more common than you think, can also emerge during pregnancy, which is known as antepartum depression. Depression isn’t the only mental health condition that can affect women (and sometimes men) during pregnancy or after birth. Perinatal (meaning around birth) mental health disorders include a range of conditions, such as:

HOW COMMON ARE POSTPARTUM DEPRESSION AND PERINATAL MENTAL HEALTH DISORDERS?

Estimates vary widely, but about 25% of women may experience depression or another perinatal mental health disorder within the first year of giving birth. The first year of a baby’s life is the time when women are more likely to develop depression than any other stage of life. Experts suggest that perinatal mental health conditions are often underrecognized and undertreated, so the numbers may be even higher.

Women aren’t the only ones who suffer. Research shows that 10% of new fathers show signs of paternal postpartum depression. That number jumps to 26% during the first three to six months of baby’s arrival, and it’s even higher for fathers when their partner is experiencing perinatal mental health problems.

Perinatal mental health disorders can manifest in a variety of ways. The following list includes symptoms of a range of different types of perinatal and postpartum conditions. If you are suffering from any of these symptoms, it could be a sign of a disorder that needs investigating.

These symptoms are in no way a sign of weakness or an indicator that you are not fit to be a parent.

There is not one single cause of these conditions, and there are numerous risk factors. Dramatic hormonal changes during pregnancy and after birth may contribute to mental health problems. In addition, financial stresses, troubled relationships, and lack of support may play a role. Having a history of mental illness or a family history of such conditions makes you more vulnerable to problems during pregnancy and after birth.

Less than half (about 40%) of mothers who are experiencing perinatal or postpartum symptoms seek help. When left untreated, postpartum depression and other perinatal mental health conditions can interfere with all-important bonding with your infant. It can also impair your parenting ability. For example, depressed moms are less likely to:

Babies who experience “failure to thrive” or who have low weight or delayed development often have mothers who are emotionally unattached.

Sadly, postpartum depression also increases the risk of maternal suicide. One study showed that suicide accounted for 1 of every 19 deaths in women during pregnancy or postpartum. This grim statistic along with the potential long-term impacts on children show why it is so important to seek treatment for symptoms of perinatal mental health disorders.

POSTPARTUM DEPRESSION AND PERINATAL MENTAL HEALTH DISORDERS AND THE BRAIN

Brain imaging studies using SPECT technology show that postpartum depression and perinatal mental health disorders aren’t simple or single disorders. Each condition is associated with multiple changes within the brain. The only way to know the root cause of your symptoms is to look at the brain.

Depression: When postpartum or antepartum depression arises, the mother’s brain’s limbic system shows abnormally high activity (this phenomenon has been detected in animals as well as humans).

Anxiety: Perinatal anxiety is often associated with heightened activity in a number of areas of the brain, including the basal ganglia, amygdala and hippocampus, insular cortex, and parts of the prefrontal cortex.

OCD: Obsessive compulsive tendencies that emerge during pregnancy or after giving birth are generally related to increased activity in an area of the brain called the anterior cingulate gyrus. This region is known as the brain’s gear shifter and when activity is too high, it causes you to get stuck on worries and negative thoughts.

PTSD: Experiencing a traumatic birth—whether it was real or perceived trauma—can reset the brain to a perpetually more active state that leads to PTSD. It is estimated that PTSD affects about 9% of women postpartum. In the brain, PTSD is associated with increased activity in the limbic system, basal ganglia, and anterior cingulate gyrus.

Bipolar Disorder: Perinatal bipolar disorder, characterized by extreme mood swings, can often be mistaken for other conditions, such as depression or even ADHD. Brain imaging allows for the detection of certain brain patterns associated with bipolar disorder for a more accurate diagnosis.

When it comes to treatment for postpartum depression and perinatal mental health disorders, one size does NOT fit all. Treatment that works for one pregnant woman or new mother (or father) won’t work for everybody, and it could even make you worse! At Amen Clinics, we perform brain SPECT imaging as part of a comprehensive evaluation, along with hormone testing and other lab work to more accurately diagnose and more effectively treat perinatal mental health conditions.

In addition, we believe in using the least toxic solutions, which is extremely important for women who are pregnant or for nursing mothers because many medications, including antidepressants, can be secreted in breast milk. Our treatment plans can include natural supplements, nutrition, exercise, and helpful forms of therapy to help you heal so you can be the best parent possible to your new baby.