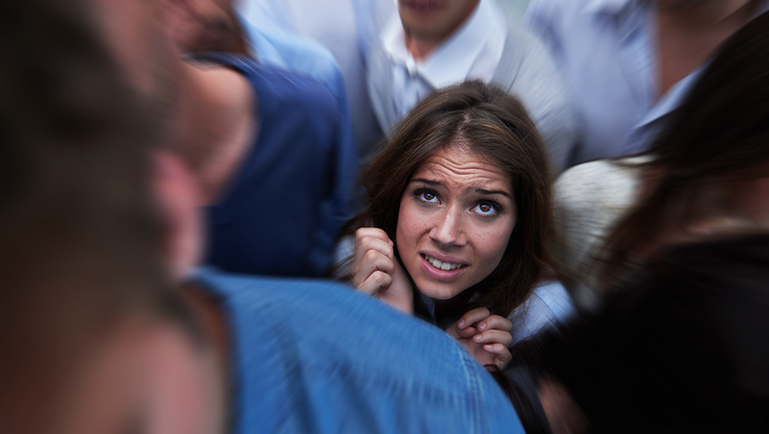 Phobias are a type of anxiety disorder that cause people to experience excessive and irrational fears that interfere with daily living. Phobias can center on places, situations, or objects.

Almost everybody has something that causes uneasiness—getting on an elevator, seeing a spider, looking down from high places—but most people can manage those fears and get on with their lives.

People who have phobias, however, will go to great lengths to avoid the situations, things, and places that trigger their irrational fears. They may understand there is no real danger, but they feel powerless to rein in their terror.

Having a phobia can get in the way of your daily routines, impact your ability to perform your best at work, create strain in your relationships, and damage your confidence and self-esteem. You don’t have to live with this constant fear.

WHO’S AT RISK OF PHOBIAS?

In the U.S., approximately about 19 million people—8.7% of the adult population—are affected by specific phobias. And it is estimated that 7-9% of children have phobias. The condition is more common in women, who are twice as likely as men to develop phobias. Symptoms typically emerge during childhood, and according to the Anxiety and Depression Association of America, age 7 is the average for the onset of the disorder.

Many factors can increase the risk of the development of phobias, including:

Here are some of the most common specific phobias:

Regardless of the type of phobia you have, the symptoms they produce are usually similar to a panic attack. Typical symptoms include nausea, sweating, rapid heartbeat, shortness of breath, trembling, feeling faint, chills, a choking sensation, confusion, dizziness, and panic. In children, symptoms including crying and being clingy, or they may resemble a temper tantrum.

Phobias often co-exist with other mental health disorders, including:

Some people turn to drugs or alcohol to calm the intense anxiety they feel in response to their phobia or to soothe the persistent worry they have about facing the thing they fear.

In traditional psychiatry, where diagnoses are based solely on symptom clusters, phobias can be misdiagnosed for other conditions, such as generalized anxiety disorder or obsessive compulsive disorder. An inaccurate diagnosis and improper treatment can exacerbate your symptoms and keep you mired in intense fear.

Part of the problem is that traditional psychiatry typically takes a one-size-fits-all approach to diagnosis and treatment. But the 3 types of phobias aren’t a simple or single disorder. Giving somebody with agoraphobia the same treatment as someone who is afraid of horses will never work.

Beware that traditional treatment with antianxiety medications for specific phobias can be harmful to the brain. For example, benzodiazepines suppress brain activity and can make the brain look toxic (shriveled or low in activity), and they have been found to increase the risk of dementia.

Functional brain imaging studies have found abnormal activity in several brain regions in people who have phobias. In some studies, people with irrational fears who were exposed to words related to their phobia showed increased activation in the following brain areas:

Brain imaging studies using SPECT clearly show that anxiety disorders, such as phobias, are not a character flaw or personal weakness. They are associated with biological changes in the brain. Our brain imaging work at Amen Clinics has helped us identify 7 different brain patterns associated with anxiety disorders, including phobias. And each type requires its own treatment plan.

HOW AMEN CLINICS CAN HELP YOU OVERCOME PHOBIAS

Amen Clinics uses brain SPECT imaging as part of a comprehensive evaluation to more accurately diagnose phobias so you can get a personalized treatment plan for your needs. At Amen Clinics, we believe in using the least toxic, most effective treatments, including helpful forms of psychotherapy, simple tools to kill the ANTs (automatic negative thoughts), natural supplements, nutrition, exercise, and medication (when necessary).