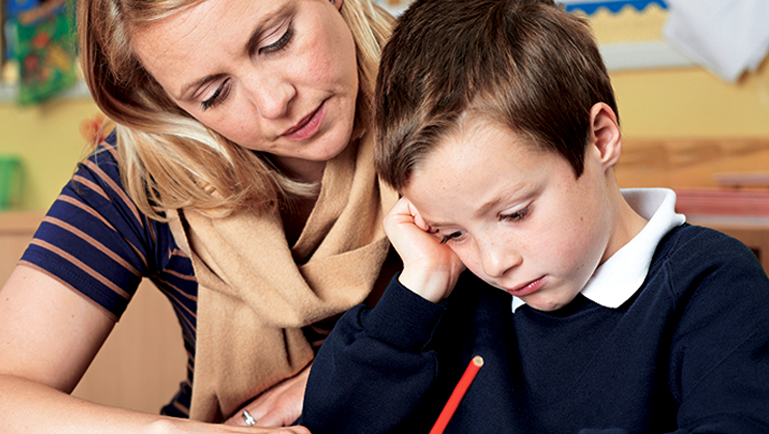 If your child is having difficulty in school, you aren’t alone. It is estimated that 1 in 5 children in the U.S. have some form of learning or attention disorder. Learning disorders can include issues, such as ADD/ADHD, Autism Spectrum Disorder (ASD), emotional disturbances, behavioral problems, and traumatic brain injury (TBI). Children with learning issues may be just as smart as their classmates, but they have trouble living up to their academic potential. Nearly half of all parents mistakenly believe that their children will outgrow these difficulties, which means these children don’t get the help they need to succeed. This can lay the foundation for a lifetime of feelings of inadequacy, shame, frustration, and low self-esteem.

Untreated learning disorders can increase the risk of:

Attention Deficit Disorder (ADD), also called Attention Deficit Hyperactivity Disorder (ADHD), is a brain-based disorder that causes a range of behavioral issues, such as short attention span, distractibility, disorganization, procrastination, and poor impulse control. It is the most common learning and behavior problem in children, affecting about 6.1 million kids aged 3-17, according to the Center for Disease Control (CDC). The condition is more common in males, with 12.9% of boys and 5.6% of girls are being diagnosed with it. Unfortunately, 23% of children with the condition receive no treatment.

Autism Spectrum Disorder (ASD) is characterized by developmental delays, communication problems, abnormal social skills, learning disabilities, and behavioral problems—all ranging from mild to severe. The prevalence of ASD has been increasing at an alarming rate in the past few decades. Today, an estimated 1 in 59 children are currently affected by the condition, according to the CDC. And boys are 4 times more likely than girls to be diagnosed with ASD.

Children with emotional problems may have anxiety, depression, or other mental health issues. An estimated 4.4 million children aged 3-17 have anxiety and approximately 1.9 million have depression, according to the CDC. About 30% of children and adolescents will be affected by anxiety, but 80% of them don’t get the help they need. These conditions can lead to a number of problems in school, such as test anxiety, trouble speaking in front of peers, lack of motivation, or irritability.

Almost all kids and adolescents can occasionally act defiantly with their teachers, get aggressive with classmates, or have a temper tantrum in class. When this type of conduct becomes a long-lasting pattern with negative consequences, it’s considered a behavioral problem.

There are over 2 million head injuries in the U.S. every year. And the number of concussions diagnosed among young people aged 10-19 has skyrocketed by 71%. Many people aren’t aware that mild brain injuries can lead to confusion, difficulty with concentration and paying attention, memory problems, anxiety, depression, and more—all of which can interfere with academic performance.

Is It a Learning Disorder or Irlen Syndrome??

Children who have trouble reading, learning difficulties, anxiety, low motivation, ADD/ADHD, headaches, autism, or TBI may have a condition called Irlen Syndrome. This is a visual processing problem, where certain colors of the light spectrum tend to irritate the brain. Irlen Syndrome affects 12-14% of the general population; but it afflicts 33% of people with ADHD or autism; nearly 50% of individuals with reading or learning challenges; and 55% with head injury, concussion, or whiplash. Students who take a long time to complete homework, do poorly on exams, or avoid reading assignments should be screened for this condition.

Through our brain imaging work using SPECT technology, we have discovered that learning issues—such as attentional, emotional, or behavioral problems—are not single or simple disorders. They all have multiple types, including 7 types of ADD/ADHD and 7 types of anxiety and depression. That’s why giving all children the same treatment will never work. Treatment that is beneficial for one child may not work for another or could even make their symptoms worse. This is why we create a personalized treatment plan for each child based on their brain type. We have also found that lifestyle interventions and other natural strategies can help improve symptoms in children with certain learning disorders and other problems, which is why we take a comprehensive approach to healing.

Kids with Learning Disorders Have Brains that Work Differently

Our brain imaging work at Amen Clinics reveals that learning disorders, attention issues, and other emotional and behavioral problems aren’t caused by laziness or a lack of effort, they’re caused by differences in the way the brain functions. For example:

ADD/ADHD: In the healthy brain, concentration causes blood flow to increase in certain regions, especially the prefrontal cortex, which allows you to focus, plan ahead, stay organized, and follow through on tasks. When children with this condition try to concentrate, blood flow tends to decrease in the prefrontal cortex, making it difficult to stay focused. Our brain imaging work has identified 7 different types of brain patterns associated with ADD/ADHD.

Autism: ASD appears to affect early brain development, including the way neurons communicate with one another. However, there is not just one brain problem found in ASD, but actually 8 to 10 factors that can influence abnormal brain function. Amen Clinics has seen more than 1,000 children and adults with ASD. The SPECT brain imaging studies of these patients reveal that their brain patterns tend to have high activity or low activity (even both in some cases).

Anxiety and Depression: Our brain imaging work has identified 7 different brain patterns associated with anxiety and depression. Some of the most common SPECT findings are excessive activity in the basal ganglia (anxiety) and overactivity in the limbic system (depression).

Behavioral problems: Behavioral issues and school problems are often related to having too much or too little activity in certain areas of the brain.

TBI: Brain SPECT imaging is one of the best tools available to identify areas of the brain hurt by TBI. On SPECT scans, brain injuries are associated with areas of low blood flow.