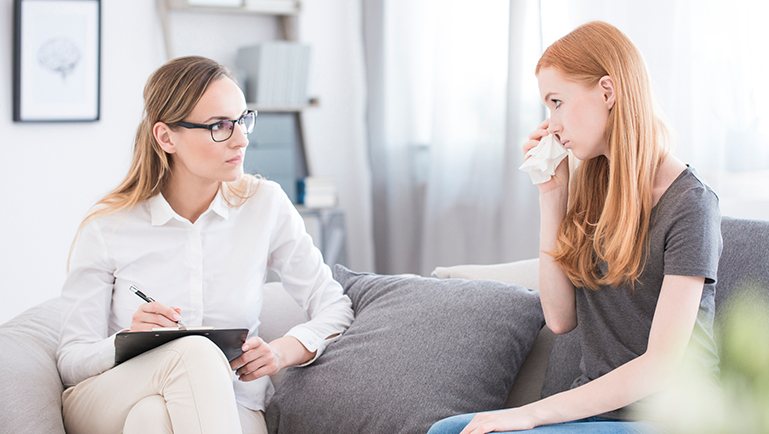 When tension, emptiness, frustration, anger, or self-loathing become unmanageable, some people harm themselves as an outlet for their emotional distress. Self-harm is the act of intentionally injuring oneself to inflict pain that is not intended to be suicidal. Clinically, this is referred to as nonsuicidal self-injury disorder (NSSID), but it may also be known as self-injury, self-mutilation, or self-abuse.

People who engage in self-harm often experience feelings of shame and guilt afterward, which unleashes even more emotional distress, which then leads to another round of self-injury. It’s a vicious cycle that can interfere with your everyday routine, steal your happiness, and negatively impact your overall quality of life.

WHO IS AT RISK FOR SELF-HARM?

Nonsuicidal self-injury is most common among adolescents and young adults and some research indicates it is becoming more prevalent. In a 2012 study in Child and Adolescent Psychiatry and Mental Health, 17% of adolescents reported engaging in self-harm at least once. Among college students, 15% reported at least one incident of non-suicidal self-injury, according to a 2011 study in the Journal of College Health. Self-harm is not as common in children or adults. In kids ages 5-10, about 1.3% self-injure. Among adults, it’s estimated that about 5% practice some form of self-harm.

Self-harm is more common in females, who make up as much as 65% of all those who injure themselves. However, some experts suggest that self-injury may be underreported in boys and men.

People who have experienced any of the following may be at increased risk of self-harm:

Some of the most common forms of self-injury include:

If you’re worried that a loved one may be practicing self-injury, look for these warning signs:

Research shows that self-injury is often seen with other mental health conditions. It is common for people who self-harm to also have the following conditions:

Likewise, a high rate of people with the following disorders also engage in self-harm:

SELF-HARM AND THE BRAIN

Brain imaging studies reveal abnormal activity in the brains of people who self-injure. A 2018 study from researchers at The Ohio University found that the brains of girls who engage in self-harm show abnormalities similar to those seen in people with borderline personality disorder. These included decreased volume and abnormal function in areas of the brain involved in regulating emotions. Decreased brain volume is also commonly seen in people who have experienced emotional trauma, abuse, or neglect.

HOW AMEN CLINICS CAN HELP WITH SELF-HARM

At Amen Clinics, we use brain SPECT imaging as part of a comprehensive evaluation to diagnose and treat people struggling with self-harm and co-occurring mental health conditions. In addition, we assess any the biological, psychological, social, and spiritual factors that may be contributing to your issues.

When it comes to treatment for self-injury, one size does not fit all! What works for one person may not work for another—or could even make your symptoms worse! Based on your complete assessment, we can create a personalized treatment plan for you. At Amen Clinics, we believe in using the least toxic, most effective therapies and strategies to optimize your brain function so we can help you get a handle on your emotional distress and find a path toward a happier life.