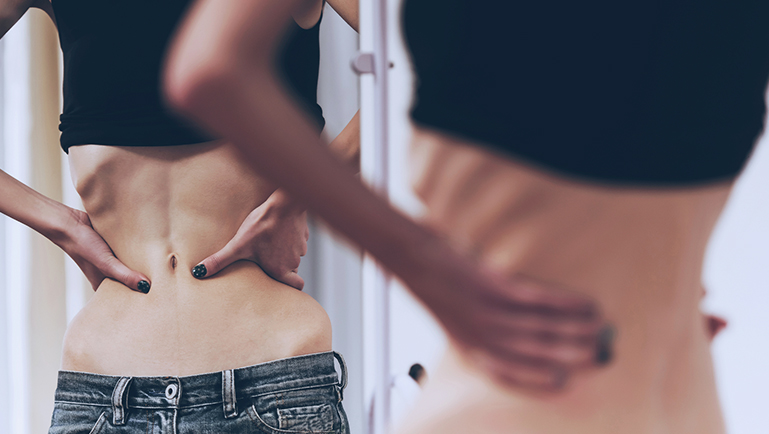 Contrary to popular belief, eating disorders are not a lifestyle choice nor are they a sign of a personal weakness or character flaw. Eating disorders, such as anorexia and bulimia, are potentially life-threatening mental health disorders that are rooted in brain dysfunction. When left untreated, these conditions can have devastating consequences on physical health and can further impair brain health. Research shows that eating disorders are associated with an elevated mortality risk and a higher risk of suicide. Because of this, it is critically important to seek help for so you can lead a healthier life.

WHO’S AT RISK OF EATING DISORDERS?

At least 30 million Americans struggle with an eating disorder. Eating disorders can affect anyone, including women and men of all ages, ethnicities, socioeconomic levels, and body types. Eating disorders are more prevalent in women, and they often begin during adolescence or young adulthood. Research suggests that some people are more vulnerable to developing an eating disorder due to genetics, exposure to trauma, harmful thinking patterns, and brain abnormalities.

Anorexia nervosa is an eating disorder in which people have a distorted body image and view themselves as overweight or obese even though they may be significantly underweight. People with anorexia nervosa tend to have intense fear about gaining weight, and they severely limit the amount of food they eat.

When people severely limit their intake of food, their brain and body don’t get an adequate supply of the nutrients necessary for healthy functioning. This can lead to a number of health consequences, including anemia, osteoporosis, constipation, low blood pressure, fatigue, menstrual irregularities, infertility, electrolyte imbalances, heart problems, and more. Issues resulting from self-starvation can be deadly, and anorexia nervosa has the highest mortality rate of any eating disorder, according to research in JAMA. This 2011 review also found that 1 in 5 people with anorexia who die take their own life.

People with bulimia nervosa routinely experience a loss of control while eating and consume excessively large amounts of food. These episodes are followed by one or more unhealthy behaviors to try to eliminate the extra calories. These actions may include purging, engaging in excessive exercise, taking weight-loss supplements, using laxatives, using diuretics, using enemas, or fasting. People with bulimia nervosa tend to be overly concerned about gaining weight regardless of their actual weight and body shape.

The cycle of overeating followed by purging or other unhealthy behaviors can have a negative effect on the health of your body and brain. People with bulimia nervosa often experience problems with the gastrointestinal tract, such as acid reflux, tooth decay, chronic sore throat. Bulimia is also associated with electrolyte imbalances that can lead to serious consequences, including cardiac arrest.

In the U.S., the most common eating disorder is binge eating. People who are binge eaters feel like they have no control over their eating and frequently consume large amounts of food. Although you may feel guilty or embarrassed about your eating habits, people with binge-eating disorder don’t try to compensate for the intake of excessive calories the way people with bulimia nervosa do. They don’t force themselves to vomit, over-exercise, or use laxatives. Because of their high calorie consumption, binge eaters are often obese or overweight, but not always.

People with binge-eating disorder may become obese, which is associated with a laundry list of physical and mental health risks. Obese people are at a higher risk of diabetes, heart disease, and cancer, as well as many psychiatric illnesses. Their eating habits may also negatively impact their life at work, at school, and in relationships.

In general, trying to eat a healthy diet is beneficial to your physical and mental health. However, some people can develop an unhealthy fixation on healthy eating, which is called orthorexia. People with orthorexia become obsessed with eating a nutritious diet and can have intense worries about eating the wrong thing. This can lead to feelings of anxiety, guilt, and shame.

Although people with this condition tend to be hyper-aware of the nutritional content of the foods they eat, they may cut out so many categories of “bad” foods that they miss out on key nutrients. Or they may not consume an adequate number of calories.

There are a number of additional eating disorders, including:

EATING DISORDERS AND THE BRAIN

Based on the world’s largest database of brain scans related to behavior—over 150,000 brain scans and growing—we have learned that certain brain regions are associated with eating disorders, including:

HOW BRAIN IMAGING CAN HELP DIAGNOSE AND TREAT EATING DISORDERS

Brain SPECT imaging can evaluate the health of your brain and detect abnormal brain patterns associated with eating disorders and mental illness. Brain scans be a very powerful tool in the treatment of eating disorders because it helps:

At Amen Clinics, we use brain SPECT imaging as part of a comprehensive evaluation to diagnose and treat people struggling with eating disorders and co-occurring mental health conditions. In addition, we assess any biological, psychological, social, and spiritual factors that may be contributing to your condition.

When it comes to treatment for eating disorders, one size does not fit all! What works for one person may not work for another—or could even make your symptoms worse! Based on your complete assessment, we can create a personalized treatment plan for you. At Amen Clinics, we believe in using the least toxic, most effective therapies and strategies to optimize your brain function and help you regain control of your eating and your life.