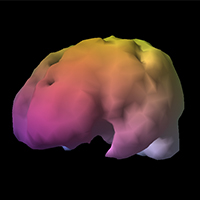 John, a right-handed, 79-year-old contractor, had a longstanding history of alcohol abuse and violent behavior. Frequently, he physically abused his wife during 40 years of marriage and had been abusive to his children when they were living at home. Almost all the abuse occurred while he was intoxicated. At age 79, John underwent open-heart surgery. After the surgery he had a psychotic episode lasting 10 days. His doctor ordered a SPECT study as part of his evaluation. The study showed marked decreased activity in the left outside frontal-temporal region—a finding most likely due to a past head injury. When he was 20 years old, he was driving an old milk truck that was missing its side mirror. He put his head out of the window to look behind him and his head struck a pole, knocking him unconscious for several hours. After the head injury, he had more problems with his temper and memory. There was a family history of alcohol abuse in four of his five brothers, but none of them had problems with aggressive behavior.

Given the location of the brain abnormalities (left frontal-temporal dysfunction), he was more likely to exhibit violent behavior. The alcohol abuse, which did not elicit violent behavior in his brothers, did in him. Knowing this information earlier might have been useful in obtaining help for his problems. 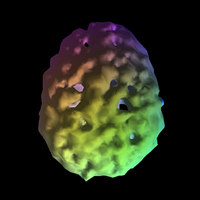 At age 28, Rusty had a severe methamphetamine problem. He was unable to keep steady work, was mean to his parents, physically abused his girlfriend and had been arrested four times for assault and battery. He had failed five drug treatment programs. Since Rusty’s mom scheduled his SPECT study, he was unaware of it until the morning of the scan. He showed up loaded with a gram of methamphetamine in his system from the night before. Rusty told us about his drug abuse. We decided to scan Rusty that morning with the effects of the methamphetamine still in his system and then scan him a week later while off all drugs.

Given this finding, Rusty was put on a medication to stabilize the activity in his temporal lobe. Within 2 weeks, Rusty felt better than he had in years; he was calmer, his temper was under control, and for the first time in his life, he could remain gainfully employed. An additional benefit of the scan was that it showed Rusty the serious damage he was doing to his brain by abusing methamphetamine. 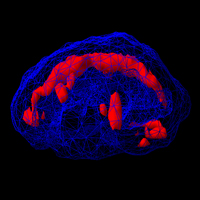 Jose, a 16-year-old gang member, was arrested after he and another gang member beat another teenager nearly to death. They were charged with attempted murder. The public defender ordered neuropsychological testing on Jose that revealed frontal lobe dysfunction and evidence of ADHD, depression and learning disabilities. The psychologist suggested a resting and concentration SPECT series for independent verification.

The SPECT series was significantly abnormal. Both studies showed marked increased activity in the anterior cingulate gyrus, consistent with problems shifting attention. At rest, his SPECT also showed mildly decreased prefrontal cortex activity. While doing a concentration task, there was also marked decreased activity of the prefrontal cortex and both temporal lobes, consistent with ADHD, learning disabilities and aggressive tendencies. 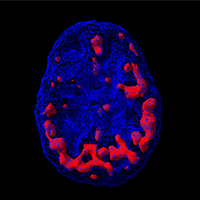 Paul, a 48-year-old gardener, came to the clinic for work-related problems. He had increasingly intense feelings of rage toward his boss and frequently thought about killing him. He reported that only the thought of his wife and small daughter prevented him from doing physical harm to his boss. He needed to maintain his job to support his family, but he could not get the anger toward his boss out of his head. He described himself as having an extremely short fuse and a history of explosive outbursts since childhood. Interestingly, Paul ran full speed into a metal basketball pole and was unconscious for several minutes when he was 7 years old.

Paul also complained of short periods of confusion, fear (for no apparent reason) and episodes of deja vu. His EEG was within normal limits. A brain SPECT study was obtained to further evaluate any underlying brain abnormalities that might have been contributing to his difficulties. 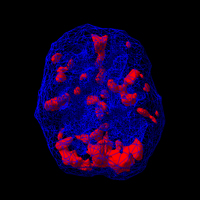 Steven, a 39-year-old radio station engineer, was admitted to the hospital for suicidal thoughts. He was recently separated from his wife of eight years. During their relationship there had been mutual physical spousal abuse for which he had spent some time in jail. Steven also complained of having a very short fuse. He found himself frequently yelling at other drivers on the road and was easily upset at work. He was tearful, depressed, had problems with sleep, poor concentration and confusion, and had suicidal thoughts. He reported short periods of feeling intense rage with little provocation, and sometimes saw shadows out of the corners of his eyes.

With the clinical picture and information from the brain SPECT study, Steven was put on a targeted medication regimen. Even though he continued to feel sad about the breakup of his marriage, he felt calmer, had better self-control and his suicidal thoughts abated. He said that he wished he had known about the dysfunction in his temporal lobe years earlier because it might have changed the outcome of his marriage.