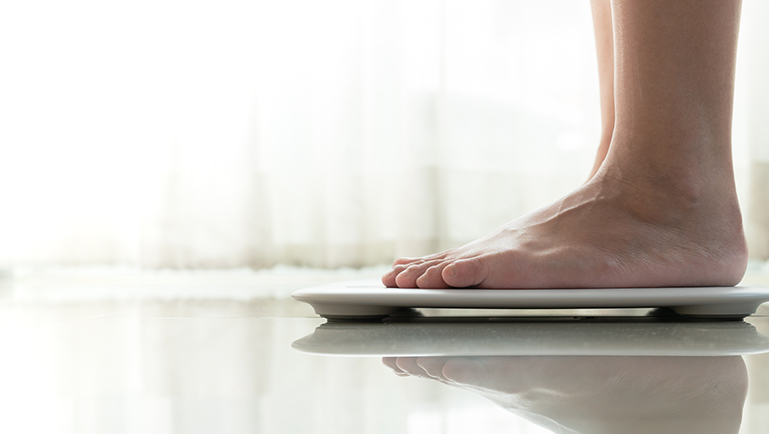 If you are on a diet right now, you are not alone! Unfortunately, losing weight and gaining it back (yo-yo dieting) is a vicious cycle that leaves millions of people frustrated and unhappy.

In spite of what the $20 billion weight-loss industry wants you to think, traditional and fad diets simply do not work. According to the Centers for Disease Control (CDC):

The obesity epidemic is fueled by a culture of food pushers.

Corporate America is highly skilled at getting you to eat and drink things that are not good for you. Every day, we’re bombarded with the wrong messages: TV commercials, billboards and radio ads show us misleading images of happy, attractive people enjoying greasy fast food and dehydrating caffeinated drinks that decrease brain function and lower your self-control.

In other words, the more overweight you are, the greater the stress on your physiology—particularly the increased inflammation in your body—which affects the volume of the grey matter between your ears, in addition to putting you at risk for serious medical problems.

Obesity is an underlying cause of many preventable diseases that result in lowered quality of life and even death, such as:

To lose weight, the body part you need to be most concerned with isn’t your belly, butt or thighs… IT’S YOUR BRAIN!

The brain is your command and control center. It’s how you make good or bad decisions about behavior and food and tells you:

The Problem with Diets

Most diets fail because they take a one-size-fits-all approach (no pun intended). Our work with SPECT imaging has shown us that there are multiple types of overeaters:

A diet that works well for one person may be completely wrong for another person. Why? Different brain systems drive different tendencies and behaviors.

The Five Types of Overeaters

People with this type tend to get stuck on thoughts of food. They hear the ice cream in the freezer calling their name… over and over and over again. They often feel compulsively driven to eat and might say they have no control over food. They also tend to be nighttime eaters because they worry and have trouble sleeping.

Compulsive overeaters tend to get stuck on thoughts or locked into one course of action. They often:

Overactivity in the anterior cingulate gyrus is most commonly caused by low levels of the neurotransmitter serotonin; therefore, compulsive overeaters do best when we find natural ways to increase serotonin, which is calming to the brain. In addition, learning how to get “unstuck” from their thoughts about food and worries is very helpful.

People with this type struggle with impulsivity and have trouble controlling their behavior, even though they may begin each day with good intentions:

The most common brain SPECT finding in this type is decreased activity in the prefrontal cortex which is most commonly associated with low levels of the neurotransmitter dopamine.

Impulsive overeating is common among people who have ADD, which has also been associated with low dopamine levels in the brain. People with ADD struggle with:

Research suggests that having untreated ADD nearly doubles the risk for being overweight. Without proper treatment, it is nearly impossible for these people to be consistent with any nutrition plan.

Impulsive overeating may also be the result of some form of toxic exposure, a near-drowning accident, a brain injury to the front part of the brain, or a brain infection, such as chronic fatigue syndrome. Overweight smokers and heavy coffee drinkers also tend to fit this type.

Impulsive overeating may worsen with food or treatment that boosts serotonin because this neurotransmitter calms the brain and although it can decrease worries it also decreases impulse control.

The high activity in the anterior cingulate gyrus is associated with low serotonin levels while the low activity in the prefrontal cortex is likely due to low dopamine levels. People with impulsive – compulsive overeating therefore, do best with treatments that raise both serotonin and dopamine (using serotonin or dopamine interventions by themselves usually makes the problem worse). It is also very important to strengthen the prefrontal cortex and practice strategies to increase mental flexibility and “get unstuck.”

People with this type tend to use food to medicate underlying feelings of sadness and to calm the emotional storms in their brains. They often struggle with:

For some people, these feelings come and go with the seasons and tend to worsen in winter. Others experience mild feelings of chronic sadness, called dysthymia. Still others suffer from more serious depressions. This type is more frequently seen in women.

Treating mood disorders with behavioral interventions, natural supplements, and medication when needed, can be the key to weight loss.

They may be plagued by feelings of panic and self-doubt, and suffer physical symptoms of anxiety, such as:

It is as if anxious overeaters have an overload of tension and emotion. They tend to predict the worst and often complain of waiting for something bad to happen. They may be excessively shy, easily startled, and freeze in emotionally charged situations.

Certain behaviors and substances can exacerbate feelings of anxiety and make anxious overeaters more likely to eat in an attempt to make those feelings go away. For example:

The SPECT scans of anxious overeaters often show increased activity in the basal ganglia, which is commonly caused by low levels of the calming neurotransmitter GABA. Interventions to boost GABA combined with relaxation techniques that calm the brain are generally the most helpful.

Why We are Different

By discovering your particular brain type, we get very important information that helps us create the best nutrition and lifestyle plan to help you:

We can help you break the weight loss/weight gain cycle for good!

*please inquire about weight restrictions on the brain SPECT machine with our Care Coordinators. We can offer a qEEG in the event that it’s safer for the patient.