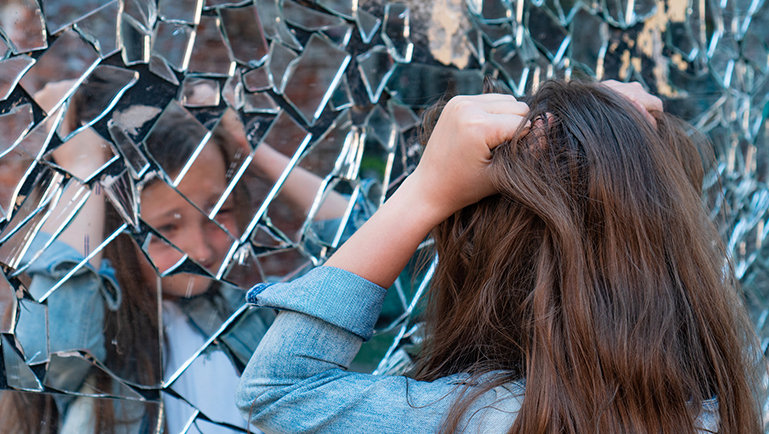 SCHIZOPHRENIA AND THE BRAIN

These disorders are complex and involve several brain areas. Abnormalities in the neurotransmitters dopamine, glutamate, and possibly others cause decreased activity in the prefrontal cortex, the area of the brain involved in decision-making, judgment, forethought, attention, impulse control, and more. Brain SPECT imaging studies on people with schizophrenia and schizoaffective disorders show why incoming information is distorted.

SYMPTOMS OF SCHIZOPHRENIA AND SCHIZOAFFECTIVE DISORDERS

Schizophrenia is a chronic, long-standing disorder characterized by delusions, hallucinations, and distorted thinking. Symptoms of schizophrenia are grouped into three categories: positive (things outside of normal mental functioning that may start happening), negative (things that may stop happening), and cognitive.

In addition to the symptoms associated with schizophrenia, people with schizoaffective disorder also have symptoms of mood disorders, including:

WHO IS AT RISK FOR SCHIZOPHRENIA AND SCHIZOAFFECTIVE DISORDERS?

Symptoms associated with schizophrenia are more likely to develop during a man’s late teens to early 20s and a woman’s late 20s to early 30s. It is rare for schizophrenia to occur in children or to develop in people after the age of 40. Research suggests that are several possible causes of the condition:

Genetics: The condition tends to run in families, which means there is a genetic component.

Brain chemistry abnormalities: Problems with neurotransmitters may contribute to schizophrenia.

Substance use: Research suggests that using psychoactive drugs, including using marijuana as a teen or young adult increases the risk of developing schizophrenia.

Environmental factors: Other possible causes include exposure to infections, autoimmune diseases, inflammation, psychosocial factors, problems during birth, or malnutrition prior to birth.

THE LINK BETWEEN LYME DISEASE AND SCHIZOPHRENIA

Many people with resistant psychiatric conditions, such as schizophrenia and schizoaffective disorders, have been exposed to infectious agents that damaged their brains. In 1994, the Schizophrenia Bulletin published an image comparing the areas of the United States with the highest rates of Lyme disease and schizophrenia. They were nearly identical. 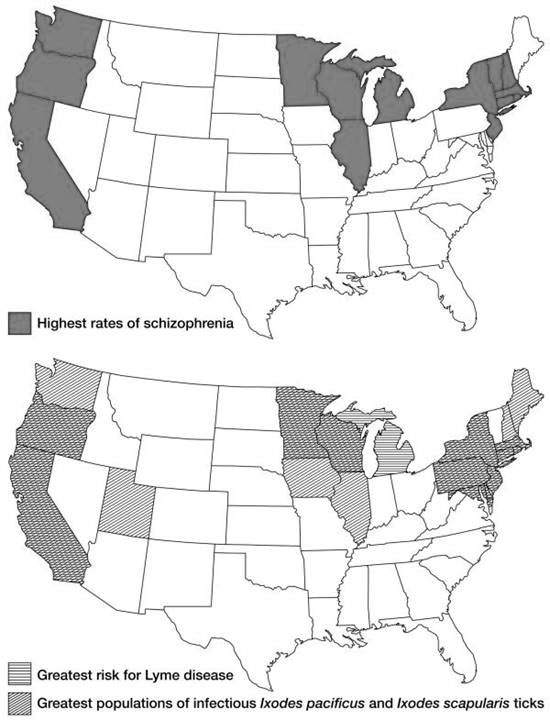 At Amen Clinics, we’ve treated hundreds of patients who came to us with resistant psychiatric symptoms, tested positive for Lyme disease, and were helped by treating it. A 2014 study reported that the antibiotic minocycline, used to treat Lyme disease, was found to decrease symptoms of schizophrenia in a 12-month period.

THE CONNECTION BETWEEN AUTOIMMUNE DISEASE AND SCHIZOPHRENIA

Many autoimmune illnesses are linked with psychiatric issues. For example, having an autoimmune disease is associated with a 45% increased risk for schizophrenia. Researchers are still trying to pinpoint the exact causes of autoimmune disorders, but many factors can play a role in their development, including:

A growing body of evidence suggests that nutritional treatment may help prevent, treat, or improve schizophrenia, schizoaffective disorders, and other conditions, such as depression, bipolar disorder, anxiety, ADHD, autism, and addiction.

Gluten sensitivity and celiac disease are related to a number of psychiatric disorders and symptoms, including schizophrenia. Adopting a gluten-free diet has been associated with improvements in people with mental health conditions. Research found a decrease, or even full remission, of symptoms in a subset of patients with schizophrenia.

WHY SCHIZOPHRENIA IS OFTEN MISDIAGNOSED

Schizophrenia is often misdiagnosed for a variety of reasons. People using mind-altering drugs, such as LSD or methamphetamines, may exhibit symptoms associated with the condition. And some symptoms of schizophrenia may be mistaken for other mental health conditions, such as depression or bipolar disorder.

Brain SPECT imaging, a state-of-the-art brain mapping tool, can be helpful to people with schizophrenia and schizoaffective disorders in many ways. It can:

At Amen Clinics, we use brain SPECT imaging as part of a comprehensive assessment to diagnose and treat our patients. We also assess other factors—biological, psychological, social, and spiritual—that can contribute to symptoms of schizophrenia and schizoaffective disorders. Based on all of this information, we are able to personalize treatment using the least toxic, most effective solutions for a better outcome.

HOW STEVE HEALED FROM SCHIZOPHRENIA

Steve’s mother brought him to Amen Clinics. Steve was homeless on the streets of San Francisco and had been diagnosed with paranoid schizophrenia and drug abuse but refused to take any medicine. He was so aggressive that he could not live at home. He was clearly psychotic when he came to our clinic and his first comment was, “I’m not going to take medicine, and you can’t make me.” He had experienced a bad reaction to medications in the past.

We told him we didn’t want him to do anything he didn’t want to do but asked if we could look at his brain, which he agreed to do. Of the more than 150,000 functional brain scans we have at Amen Clinics, Steve’s scan was one of the worst we had ever seen, with overall low activity. When he saw it he just stared at it for about 5 minutes, then asked, “Can you help me?”

We told him that there were better medications than the ones he had tried before and put him on a newer antipsychotic medication and gave him an appointment for 3 weeks later. A week later, Steve’s mother showed up in our clinic and said, “You cannot believe how much better Steven is. He is not hallucinating as much and is calmer, and we can have him live at home.”

When Steve came in for his 3-week follow-up visit, he was so apologetic for being difficult and said he felt so much better. His scan was also remarkably better as well. In less than one month, his brain was better. 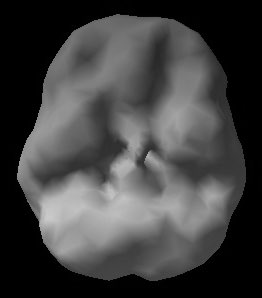 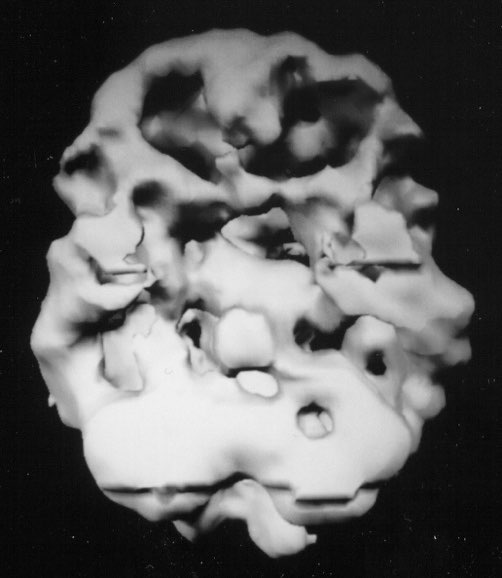